“Saving the Cheetah by Changing the World”
December 2018

Dr. Laurie Marker is the Founder and Executive Director of the Cheetah Conservation Fund. Based in Namibia, Africa, this fund has dedicated itself to saving the cheetah in the wild since 1990. Its approach to conservation spans all sectors, including helping local communities through education and assistance programs, to discussing possible policy solutions with politicians from Africa and around the world. 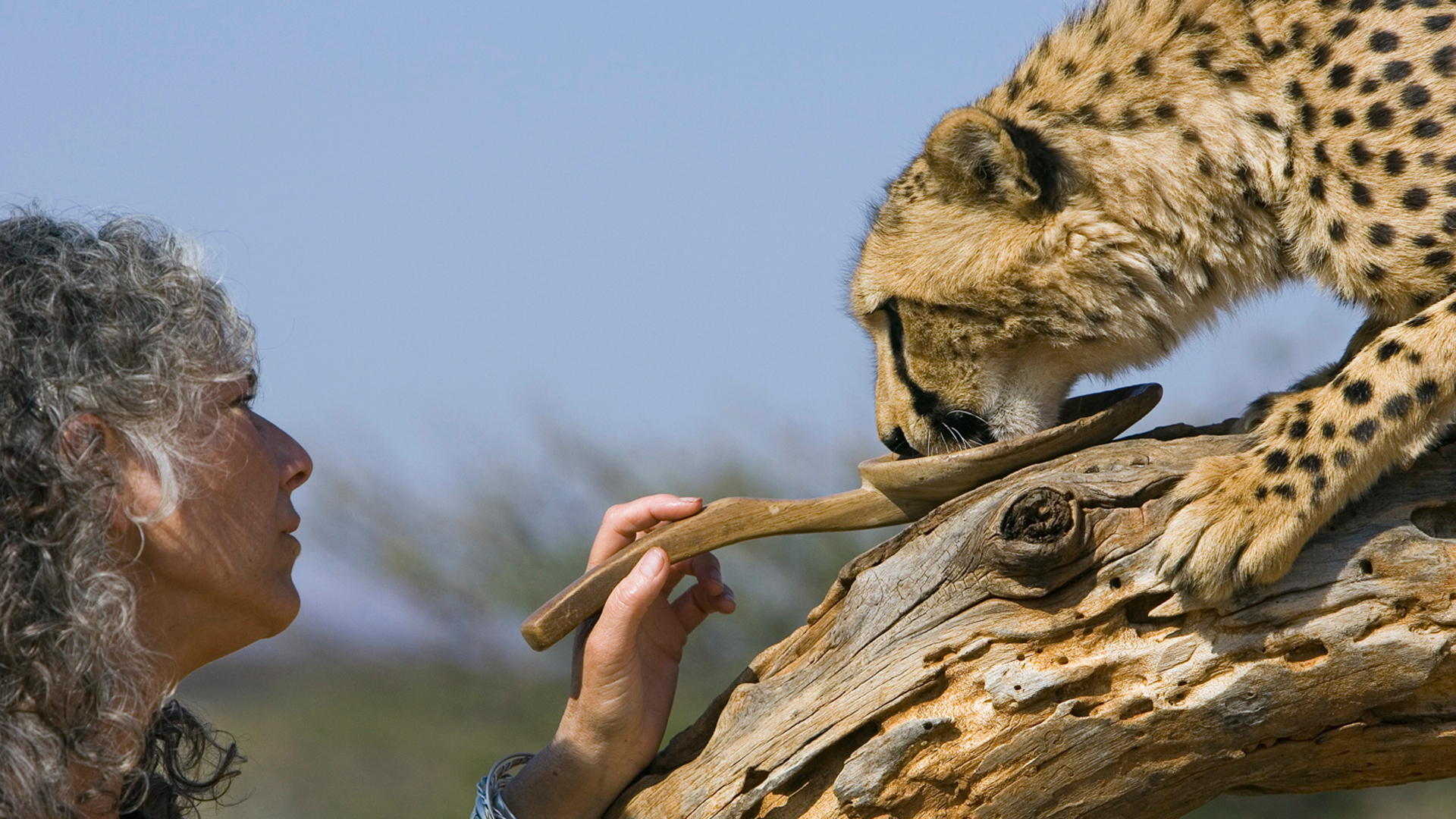 Dr. Marker has been the propelling force, generating global communication and partnerships to create increased awareness about the Cheetah’s plight. Dr. Marker is considered the world’s foremost expert on cheetah biology and an innovator in strategies that build local support for wildlife protection and habitat restoration. For this and her ongoing efforts and dedication to Cheetah Conservation, Dr. Marker was awarded the 2010 Tyler Prize. She realizes that in order to effectively save the cheetahs, she must address local and global issues and help change the world.

“Change the world and save the cheetah.”
– Dr Laurie Marker.

Why did you decide to create the Cheetah Conservation Fund?

The cheetah doesn’t seem to have any other help. We’ve got a handful of people who know about cheetahs, but I set up the foundation almost 30 years ago, and it’s been an ongoing thing. Cheetahs are in decline due to human pressures, and our issues still revolve around trying to mediate those pressures and try to help the species survive. My goals are applying research into conservation measures to mitigate the conflict of livestock farmers with cheetahs and other predators, including the African wild dog, which is a part of our work now also.

Today there’s less than 7,100 cheetahs. I’d like to double that to 15,000. That is going to depend on land availability and land use by rural livestock farmers, as well as reducing people who are living in poverty throughout Africa. With that, the goal to save the cheetah, as I always say, is change the world and save the cheetah.

How do local communities feature into your conservation strategy?

Over 80% of all cheetahs remaining are found outside of protected areas, on lands where there are communities and their livestock. Here in Namibia, it’s over 90%, and therefore communities are the key to the species’ survival. We continue to be effective as a Conservation Fund as our work really revolves around finding out what problems are, and implementing solutions which help create the local communities and simultaneously help create effective conservation.

One of the big projects that we’re working on is education and training, as well as baseline biodiversity studies in communal areas here in Namibia, where the human-predator conflict is the greatest with rural farmers. Quite often, people don’t have access to education or training, and therefore if they can have education, they then at least know what their problems are, and from there, they can start making a plan to fix them.

On another level of our education, we’ve got a full education team that is doing outreach programs to schools. Our educational materials have been put into a variety of different languages, so we can effectively target young youth as well.

We also work with interns from universities. Then on another level with that, we’re trying to train the next generation of African scientists. We work with a variety of universities around the world, and so we have a lot of university students that apply from us internationally. In Namibia, we work very closely with the two universities, who are constantly sending us interns and students.

How can you apply your program model to other conservation issues?

Our program has been a model for most of the predator organizations around the world, because we are one of the first organizations to look at predators outside of a protected area, working with people. I believe the needs assessment, and then looking at the best and correct use of tools, and then applying and adapting our programs like Future Farmers of Africa, have been most applicable.

I’d say that each one of those are probably very equal in what their component is into trying to make a place for the cheetah to live on earth. The education is critical, but then giving tools – tools like livestock guarding dogs, or programs that are going to assist economically, like Habitat Restoration – are also essential. Then making sure that everything is supported through understanding and monitoring the science it is based on, or continuing the research.

Through those components, we try to target areas where there is high human-cheetah, or human-predator conflict, where we can then help reduce conflict by implementing management strategies.

Are you looking at expanding the Cheetah Conservation Fund?

Yes. Today, our staff is over 125 people, and if we’re going to save the cheetah, we need to scale up. We’ve helped develop programs in several other countries including Kenya, Iran, Botswana, and South Africa. We’re working now in Angola, and so our programs are definitely on a scale-up, and I continue to scale them up until I hope that the cheetah is better in its numbers.

Currently, I’d like to double my budget in the next two years, to be able to do twice as much as I’m doing right now. That means having more staff, more people on the ground, educating more people, having more interns, clearing more bush, making more products, and making Africa a rich place, which allows the cheetah to live and flourish.

To help raise awareness we have partner organizations that we’re already linked together with, like zoos or museums. I also speak at places like the EU, or working with the US programs like the International Conservation Caucus Foundation (ICCF), where we are working together with the legislators in the United States to understand critical issues that are affecting the world, that they can learn about.

We also just published a textbook on cheetahs. As one of the editors and co-authors of the book, I was a lead editor, it is the definitive book on what we know about the cheetah today. The book is called Cheetahs: Biology and Conservation.

Who is important to discuss environmental programs with, to create effective change?

The ICCF works in a variety of other countries, and I’ve been able to help develop it within Africa governments. There, you’re able to talk to the government officials who are in parliament about issues that are facing their country environmentally. Those are the legislators, and so it would be like senators and congressmen. So, within Africa, important discussions would be with members of parliament.

In America though, I’d say that private people have been the ones who have really pushed agendas through nonprofit and philanthropic ways, more so than businesses or government in the United States.

It’s different in other places, and in Europe people are not engaged that much philanthropically. They believe that government is the one that should be doing all of the work. That’s why I spend my time working with the EU, because they are the parliament, they’re the ones that are affecting changes throughout areas like Africa.

Every country has different ways to engage in environmental programs.

How has the Tyler Prize impacted your mission?

I think the Tyler Prize, which is the leading environmental acknowledgement, is considered to be the gold award within environment.

The Tyler Prize has allowed me to complete some of the projects that I’ve wanted to carry out myself. I’ve published a few different books that have been important to spread the awareness, and have been able to have funds available for some of the projects that I need to do that I didn’t have a budget for, like going up to an emergency meeting to try to assist with illegal wildlife poaching in Map of Somaliland.

What an award does, is it says, “Well, you’ve done something and that’s great,” but I’m not done doing things. It was very, very nice and a huge honor to receive it, but anybody who knows me also knows that I’m ongoing and have more to do.

If you wish to donate or get involved with the Cheetah Conservation Fund, you can do so here. This fund is having a great impact upon wild cheetah populations and their research is essential to our understanding of these magnificent cats. We at the Tyler Prize fully support Dr Marker’s efforts and admire her continuous dedication and efforts to the cause.