“The Last Decade of Opportunity”
July 2019

Dr. Thomas E. Lovejoy is one of the world’s leading environmental problem solvers and ecological scientists. Graduating with a Bachelors and PhD from Yale, Lovejoy was one of the very first presidents of the Society for Conservation Biology, and is credited with coining the term biological diversity, or biodiversity. Since winning the Tyler Prize in 2001, he has continued working towards biodiversity conservation through his ongoing environmental projects, in addition to publishing multiple papers and books. Lovejoy is currently focusing on Amazon Conservation through reforestation and awareness.

What was it like to win the Tyler Prize? 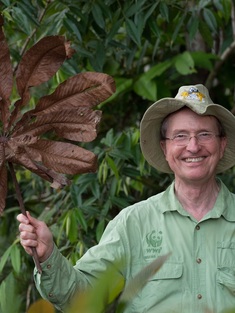 What the Tyler Prize does is in many ways it shines a spotlight and what you’re trying to do in your career trajectory so that it’s not just about what you’ve done. It’s the direction you are continuing to work. As a consequence it really enhances the Laureates’ effectiveness.

It recognizes the power of individuals in making a difference, but it also recognizes the important topics they’re working on. It becomes a super validation, an enhancement of these essentially career efforts. There’s absolutely no question that it puts you in a different light and a light that gives you more influence in moving the environmental agenda.

In my case that part of the recognition was around the work I’ve done on habitat fragmentation which when I started out was not even considered a conservation issue. What this does now is help elevate habitat fragmentation and the countermeasure, which is reconnection to a bigger issue than otherwise it might be.

What projects are you currently focusing on?

Currently, I’m continuing to work on habitat fragmentation in the Forest Fragments Projectin the middle of the Amazon and institutionalizing that. It’s been 39 years and it’s still going. It’s got to evolve into something that doesn’t depend on me and I’m working hard to get it to that level.

Secondly, I have an ongoing agenda about Amazon conservation. It’s important to maintain it as the system it is because it currently makes half of its own rainfall. If too much forest is degraded or destroyed it begins to undercut that hydrological cycle.

It’s really important to think about the Amazon as a holistic system and that means you have to worry about everything that’s going on in the Amazon. That’s not just the science but also the shortsighted development initiatives which could actually undercut it’s sustainability in the long-term.

Is there a point of no return regarding the amount of trees that are cut down in the Amazon?

Carlos Nobre and I actually did a piece about that and science advances in early 2018 called the Amazon Tipping Point. We think that the tipping point is somewhere around 20 to 25% of deforestation. We think it’s very close to that right now. We think that the intense droughts of 2005, 2010, and 2016 are first flickers of warning about that.

The good news is that it’s possible to build back a margin of safety by participating in reforestation. However we also must note that we can’t be super precise about where this tipping point is, but it makes zero sense to discover it by actually tipping it over. After you’ve started reforestation it immediately begins to contribute to the hydrological cycle. It’s not like it only contributes when it’s grown into mature forest. It’s contributing in greater degrees as the trees grow and approach mature forest status.

I’ve actually just released a textbook that I have co-authored with Lee Hannah, Biodiversity in Climate Change: Transforming the Biosphere.

The second part of that, ‘Transforming the Biosphere’, is very deliberate because at the rate of which Climate Change is having impact already, it is very transformative but also embedded in it is the very positive meaning that if we do a lot of ecosystem restoration we can actually reduce the amount of climate change that would otherwise take place.

Most people don’t know that there is an extensive amount of CO2 in the atmosphere from destroyed and degraded ecosystems. It’s a bigger number than anybody realized prior to January 2017, which means that forest restoration, grassland restoration, agricultural ecosystem restoration, coastal wetland restoration – all of which provide benefits that one would want anyway – also have the benefit of pulling CO2 back out of the atmosphere.

A really important message is that the Earth is a living planet. It’s not just a physical system but a linked physical and biological system. Basically humanity needs to embrace that and embed our ambitions in nature for both systems to, not only survive, but actually thrive.

What recommendations would you give to new conservation efforts?

They need not only to be sharp about the science, but they also need to really engage with the local communities. They need to listen to them and let them have a say. The local community is basically a joint player in the conservation effort if it is to be effective.

I think the most effective way to get people on board for conservation, is to actually take them out into nature and let them experience it firsthand. I say that because we – people – have been shaped by evolution to be interested in other living things. If we can take people away from intense interactions with just other people and actually give them the opportunity to experience the natural world and the marvels of individual plants and animals, I think you basically achieve half of what you need to get done.

Everybody will have their own particular way of doing this. I take people to my camp in the Amazon two or three times a year. It never fails because when you’re out in the forest for three nights, disconnected from the internet, you actually start listening to the biodiversity of the forest and you can’t help but understand that it actually is a living planet.

What is something that you’re really excited about in terms of conservation development?

Well, there’s an important landmark which is the convention on biological diversity has its conference of the parties in Beijing in 2020 and at that conference is when the targets will be set for the succeeding decade. That’s really, really important. In many ways it’s the last decade of opportunity.

The problem though, is that a whole bunch of targets were set a little less than 10 years ago and some of them have not actually been achieved and are not achievable in the remaining time. What worries me the most is that will become an excuse to have overly modest targets.

Are you an advocate for more hard line targets?

This is an ongoing subject right now and it’s being discussed at the Conservation on Biological Diversity, Conference of the Parties (CoP) in Egypt. It’s really hard to put an ideal number on it right now, but basically the really important thing to recognize is, we can actually feed all the coming billions of people on this planet without destroying another square inch of nature through a combination of improving productivity, reducing food waste and changing our diets the way the doctors are telling us to do anyway. If we can put some better order into the development process we can actually do a lot. The time to start is now.

How would you initiate these ideas and strategies?