As a co-founder with Peter H. Raven of the field of coevolution, Dr. Paul R. Ehrlich has pursued long-term studies of the structure, dynamics, and genetics of natural butterfly populations. He is a pioneer and advocate in alerting the public to the consequences of population growth, limited resources, and the environment as matters of public policy. We caught up with Dr. Ehrlich earlier this month.

What are your thoughts on society’s broader failure to respond to high probability threats, like climate change, and COVID-19? 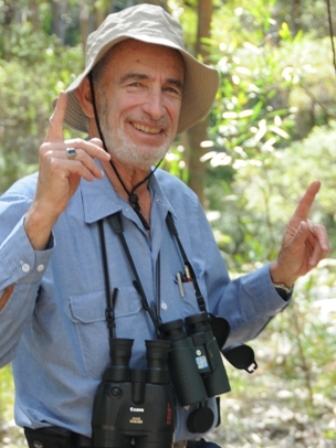 Well, Trump keeps saying it’s a surprise. Well, it’s the weakest surprise of all time. Anne [Ehrlich] and I first wrote about these problems in a book we wrote in 1970, called The Epidemiological Environment, which warns about this sort of thing.
And Gretchen Daily, the very distinguished scientist—she used to be my student; she’s now my boss. But in 1996, I believe it was, she was the first author on a paper the two of us wrote, specifically warning about the disease issues, and the viruses, that were going to be coming back. She’s been way ahead of the curve on all sorts of stuff.

What major issues are being ignored that are leading to these ‘surprises’?

First of all, one of the most ignored factors, certainly the most ignored major factor in the existential threats to our civilization is the size of our population, and it’s growth. From the footprint analysis, and so on, we’re already something like 50% over what could be sustained in the long run, in terms of human population. And nowhere is the population factor in our problems more obvious, than in the epidemiological department, in the area of emerging diseases.

Most of our infectious diseases all come from other animals. The larger the human population, the greater the chance of a disease of other animals getting into our population. The size of the population is important, because the more people you have, the more you push people into the habitats of other animals, and that makes the chances of a transfer being higher.

How might population size be a factor? Can you give an example?

Sure. The more people you have, the more you tend to have large numbers of malnourished people. For example, current estimates are, there’s something like two billion human beings, who have micronutrient malnourishment, which makes them immune compromised, which makes them then receptors, good receivers for animal diseases. As you have more and more people, with lots of hungry people, bush meat becomes more important, and then you get bush meat markets, as they had in Wuhan, and you have a higher chance of the disease transferring.

So the science of the human population: when we were 100 gatherers there were no epidemic diseases, because if a disease got into a group, they all died, or became immune, and that was the end of it. They were not going to be flying in jets to other parts of the world. Now, you have almost eight billion human beings, all genetically very similar, and it’s a wonderful target for a virus, or a bacteria. And we’ve added to that gigantic amounts of biomass in cattle and chickens. Chickens are, I believe by far, the highest biomass of birds on the planet. And so with our domestic animals, and huge numbers of chickens, pigs, ducks in China, again, you have a population-related generator of viruses.

Do you think as a global community we’ll be able to change that? Do you think there will be pressure on places, like China, to get rid of those animal markets, or to consume less meat?

Well precisely, when you ask what we should be doing, the answer is: we’ve got to change the entire system. People don’t want to hear that, but for instance, there’s a lot of fuss in the US right now, because Trump is reducing the café standards, making cars more inefficient, so his friends in petroleum and the fossil fuel industry can make more money. And the answer is, of course, the problem is not so much making automobiles more efficient, it’s getting rid of most of the automobiles.

Anyway, the people who don’t understand how the world works, want to pave it over, and have everybody running around with a couple tons of metal surrounding them in automobiles, that’s got to stop. It’s not just the carbon dioxide you get out of cars, you get air pollution from the rubber rolling on the road, you get huge amounts of environmental destruction trying to mine the metals and all the things that go into automobiles, the cost of production, it’s just an insane way to move people around, and it’s insane to have so many people alive at the same time.

I’m sure you’re quite right when you say people don’t like hearing that?

When people say, “Oh, we don’t want to deny millions of people the chance to live by limiting the size of our population,” well it turns out, if you want to have a maximum number of people live, the way to do it isn’t to see how many can cram on the planet at one time. The way to do it is to have a sustainable society, millions, but not many billions, for thousands, or millions, of years. And what we’re trying to do now is purge the whole system, and we’re succeeding.

The health threat from the COVID-19 virus is trivial, compared to the health threat from climate disruption. In other words, yeah, we’re going to lose millions of people, particularly with people like Trump in charge, Trump’s got a lot of blood on his hands already, but that’s nothing, we could lose everybody to climate disruption. The entire world’s population. Certainly, civilization will go down the drain, if we don’t do anything about it, and it is possible that it will lead to the extinction of homosapiens, although not likely.

Do you think that the huge changes we’ve had to make, in facing COVID-19, will help humanity in making the types of changes that will be necessary to overcome climate disruption?

It could, if you could convince the people who own the world to do something about it, if they are threatened, too. The US, for example, is not even remotely a democracy now, it’s a kakistocracy, run by plutocrats. They probably don’t care about children, just short-term profits.

You co-published a paper with Gretchen in 1996, titled “Global Change and Human Susceptibility to Disease”. In addition to climate, and population, what other global changes have increased human susceptibility to disease?

Well, again, there’s a whole bunch of diseases that are not transmissible, that the human activities have made much more common. The best example, the most frightening probably to most people, is the toxification of the planet. That is we have manufactured all these synthetic chemicals, and spread them everywhere, and we’re just discovering, for instance, that the basic rule of toxicology doesn’t work. It turns out, many of the novel compounds that we’re releasing, like the Bisphenol A, are more potent in tiny quantities, than they are in large quantities—there is a big literature on this.

Sperm counts appear to be dropping around the world. The data are not as good as people would like, and there’s still controversy about it, but it’s possible that it’s result of a huge number of interacting nasty chemicals that we’re all exposed to, many of which have no important function in human life, (ie. they make things cheaper, or they let you manufacture more kinds of crap, and so on) but most of them are not adequately tested.

Also countries have begun to specialize. If, for example, the international transport system starts getting into trouble, Costa Rica’s going to be in trouble for food, because they’re good for coffee, rather than growing crops that local people can eat. In the US, we have big problems now with the ventilators, because something like 15 countries make the parts that go together to make a ventilator. There’s no ventilator manufacturing capability in the United States at the present time, that doesn’t involve getting parts from elsewhere, so as our population has gotten larger, we’ve tied it together with transport, which makes it easy for viruses to get around, but not so easy, if systems start to break down, for food and necessities to get around.

The rich world is utterly dependent on transport to feed people. And so when you’re looking at something like COVID, you’ve got to pay attention to what’s going to happen to the transport system. People don’t seem to realize that the electric grid requires people to run it, to repair it, to keep it going, and if they don’t go to work, you’re going to be in trouble for electricity. The water, for most people, doesn’t come by magic, there’s a water system that people have to run. And the food is transported by a very complex system too.

And finally, the federal government has been unconscionable, unbelievable, not just evil, but super evil. I can’t… Never mind. [Sighs]

You mentioned that Gretchen Daily was your student, and is now your boss. Can you tell me what was she like as a student? And what’s she like as a boss?

As a student, she first of all, worked very hard not just as a student, but also to make the money to go to school, and so on. I think everybody who knows her would say, “She’s extraordinarily hard working.” Some of us, who are older than she is, have tried very hard to get her to take it a little easier, because she is so dedicated to trying to save the world, and always has been. And as a student, she was ideal.

First of all, she had great ideas, which is what every professor needs: a smart student to steal ideas from. [laughs] She took my advice, for example, I’ve always told my students, “As miserably as it’s taught, you have to learn a lot of mathematics to do a good job,” she took my advice, studied a lot of mathematics. And everybody likes her, I mean, she’s not only brilliant, but she’s wonderful to people. So she was a pleasure to have as a student.

And she’s actually raised two wonderful kids, that are now late teenagers. I would say she is the leading environmental scientist in the world, under the age of 60.

And she has a huge number of people dependent on her, both in universities, particularly in Stanford, but in other universities. Her National Capital Project involves governments and industries, and so on. And for instance, she had a huge meeting arranged for government industry and scientists here, about a month ago, and had to cancel it, after putting in gigantic effort for months to put it together. So the COVID thing has hit her, like many other people, extremely hard. And she is still trying to make sure that everybody… She has friends in poor countries, she’s trying desperately to make sure they’ve got enough food.

I don’t know of any work being done by environmental scientists that’s more important, in terms of on the ground, on the spot, making human welfare better. And of course, she’s important at the more general level of dealing with climate change, dealing with the epidemiological environment, is a good example. In other words, that’s not on the ground stuff, but you can see, if Donald Trump had been able to read, and had read that paper, in 1996, we might have millions of people in better shape today. So nothing is more important, than what Gretchen has been doing. There’s many other really wonderful people working on these problems, but she certainly is outstanding among them.

To read more on Dr. Ehrlich’s work and interests: