“Women in Science – The Key to Sustainability?”
June 2020

“We must learn to love one another with understanding, or we can’t manage the planet sustainably. I think international understanding is the most important thing, and science is a perfect vehicle for doing that.”

Professor Peter Raven became a Tyler Prize Laureate in 1994, with research focused on botany, conservation, and sustainability. Described by Time Magazine as a “Hero for the Planet”, his combination of brilliant botanical research and efforts to address habitat destruction and species extinction worldwide have made him one of the most effective exponents of the conservation movement. 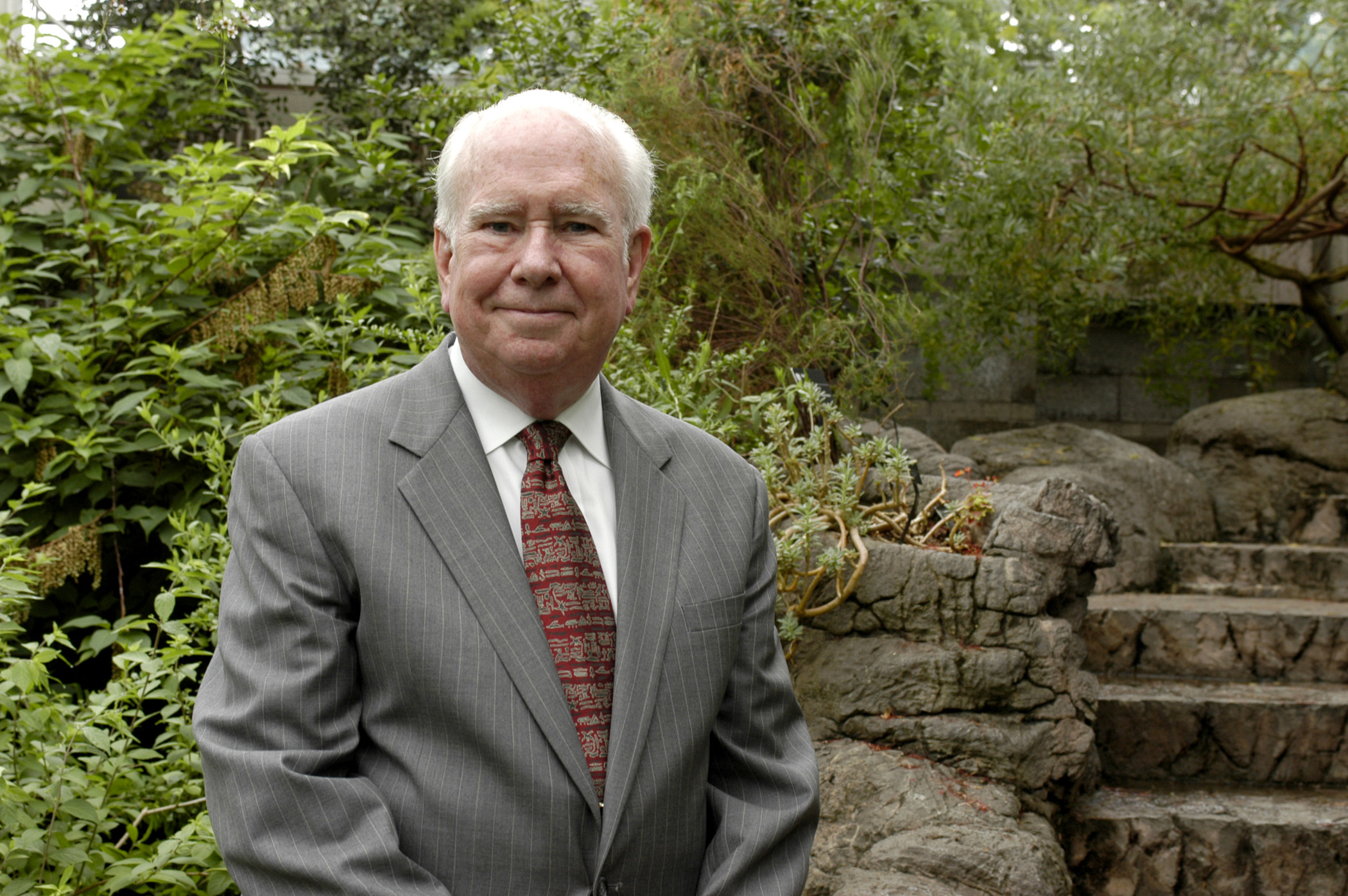 Currently the George Engelmann Professor of Botany at Washington University – St. Louis, he previously served as Director for the Missouri Botanical Gardens for 39 years.

Prof. Raven has over 700 publications. His publication record is so prolific, the American Society of Plant Taxonomists acknowledged him by creating a Peter Raven Award for botanists who make exceptional efforts at outreach to non-scientists. He is a champion for women’s rights and participation of women in science.

Peter, why is recognizing Environmental Achievement so important?

Being a Tyler Laureate really means having achieved recognition in the field of environment. Having prizes like the Tyler Prize reassures people that there are intellectuals who are pursuing relationships between all the factors in the world and in the universe.

We need to acknowledge achievements to encourage people. There’s no doubt that if you work hard, it makes you feel like you’re being successful and recognized. The more successful and recognized you are, the more influential you can be about things that you think are important. In my case, that’s conservation, internationalism, and women’s rights, among others. You can get into positions of leadership, and you can affect people’s thinking much more easily.

You are definitely a leader in your field – how did you get to where you are today?

Earlier in my career, my work was based on the evolution and relationships within the evening primrose family, which includes fuchsia, evening primrose, and willow weed – about 600 species all over the world. Studying them brought me all over the world. I met people and saw places that I wouldn’t have had the opportunity to otherwise. But the important thing is when you do something like that from a multidimensional point of view, you learn from people that know a lot of things that you don’t know, and it makes it all a very interesting puzzle. That’s the way it’s been for me. Learning all I can from others.

By the time we got to the late ’60s, conservation and biodiversity were becoming acknowledged as very important areas and I have devoted a lot of my effort to them. I came to the Missouri Botanical Gardens and to Washington University in 1971, just as general conversation awareness was becoming an issue. Before that, people thought of conservation as just saving lions and tigers, but at this time it was becoming obvious that extinction was a major worldwide problem. I devoted huge amounts of effort to promote it in the various institutions that I have been part of, like the National Geographic, the Pontifical Academy of Science, and so forth.

I was the Director of the Gardens for 39 years. I should say the Tyler Prize helped me here as well. It was a lift both psychologically and financially, that enabled me to do more and take up subjects and things that I would never have been able to otherwise. One such area we got into was researching the flora in China. At that time I must’ve made about a hundred trips to China.

What was so fascinating about the Chinese flora that kept you going back?

China is important to my work for two reasons. If you take the big North Temperate Regions of the world you find that China, Europe, and the United States are all about the same size. China has about 33,000 species of plants, the United States has about 15,500, and Europe has about 12,000. So, China’s the place where north-temperate flora survived in most of their full diversity.

I think primarily this is because when the climate deteriorated in North America and Europe, there was nowhere for the flora to go. North America have deserts and the Gulf of Mexico to the south. Europe has the Mediterranean and very arid desert regions. But China extends into the mountains of southeast Asia, and so they have a much bigger sample. They have both a bigger sample of the plants that once were all over the North Temperate Region, but also an enormous amount of the development of new species in the varied habitats that the climate has changed. So China is much richer in plant life than the other places.

Secondly, from a psychological or political point of view, I was very anxious to help bring the institutions of China back into touch with the scientific institutions in other parts of the world. In 1949 there were 13 universities in China that were operated by Americans for Chinese students. Those were all taken over and the Americans forced out after ’49. Since then, connections have been sparse.

I knew there was a great opportunity for linking people and wanted to contribute as much as possible. In botany, facilitating connections have worked extremely well. We built a great worldwide community, mainly because we structured the volumes of Flora in China, in such a way that every part of it has authors from different countries, different sides and different persuasions – from China, from America, from Europe, and so forth.

What inspired you to become a botanist?

I was first fascinated by looking at a few books and realizing just how much there was out there in nature, and then getting out and seeing it because it’s so utterly spell-binding. The diversity that one finds even in one’s own garden is astonishing. Like many people, I started out with butterflies. I was fascinated by the fact that they have complex life histories where the egg, the caterpillar, the chrysalis, and the adult were complete, distinct-looking stages and see different kinds of butterflies.

Then I was fascinated with beetles. Then with plants. One of the things I like about plants is I combine the awe of seeing how beautiful, varied, and interesting nature is with an optical collectors instinct. If there are 14 species of one group of plants in California, I have to see them all. I’ll go out and find them, and seeing how they all differ is like solving a major puzzle.

Why do you believe that science communication or science outreach is important?

Engaging people in science is important because the principles that are being found in science are deep, meaningful, and constant for all of us. If the general public understands how they’re derived, how they’re tested, and what they represent once they’ve been tested, we have a chance at advancing our whole civilization.

What are some issues in our natural world that you think are important to communicate?

To start with, over-population. The human population was an estimated one million people total at the time agriculture was developed, about 11,000 years ago. The world is now home to 7.6 billion people, going to 9.9 billion by the middle of the century. All those people and their ever-increasing and ever-ambitious desires to consume are putting intolerable pressure on the Earth.

Which brings us to urban sprawl, where there are two big problems. First of all, it tends to destroy everything around the urban areas. Secondly, people who are living in cities don’t usually understand that our lives depend entirely on living organisms, the interactions between them and what they do for the air, soil, and water and what they provide for us directly. If you’re living in a big city, you’re much less likely to appreciate that. If you’re closer to nature, you’re more aware that all of the activities of people – global warming, pollution, mining, agriculture – are reducing the nature on which we depend entirely for our support. Living in an urban sprawl area in a big city would just limit your insights even more.

Finally, you mentioned that you use your influence to promote women’s rights. Why is that?

I champion women’s rights every time I give a talk because it’s the key to reaching, in my view, global sustainability, a level population, and equality throughout the world. The fact that women have been so excluded and so neglected in science is appalling. The idea that we would allow half of our population to be unrepresented in any field of enterprise is simply wrong.

Why does a newspaper have diverse writers? Because you get different perspectives. Well, you can’t just exclude half the population from a discipline that helps move the world forward. You’ve got to embrace the whole population with all of its diversity and its opportunities, and empower everybody to contribute to their best ability because we can’t afford to do less.

To read more on Dr. Raven ’s work and interests: