“Sitting Down with Skeptics”
March 2021

Sadly, Dr. Mario Molina, Tyler Prize Laureate of 1983, passed away before we could interview him for the Laureate Conversations series, which we began in 2019. The interview below is extracted from his interview with Agneta Wallin Levinovitz on 19 May 2011. 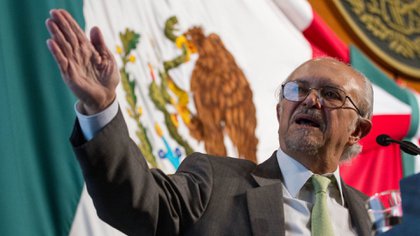 Mario Molina was awarded the Tyler Prize in 1983. We sadly said farewell to this visionary chemist and environmental scientist when he passed away in October 2020. Born in Mexico, Dr. Molina pursued his graduate degree in the United States. He later earned the Nobel Prize in Chemistry for discovering how chlorofluorocarbons deplete the ozone layer. Dr. Molina was a professor at the University of California, San Diego; Director of the Mario Molina Centre for Energy and Environment; and a member of the President’s Council of Advisors on Science and Technology. His last paper, published just months before his death, was on the importance of wearing face masks to prevent the spread of Covid-19.

I became interested at a very young age. It started from reading as a child about pirates but I came across some biographies of scientists and I became fascinated about Madame Curie and others like that. Then I asked for, as a present, some chemistry sets and then a microscope set. I did experiments on my own when I was 10 years old. I had a dream to become a scientist.

Do you have any advice on how to inspire young people to become scientists?

Yes. In school, children are taught science in a normal [academic] way, which seems to be boring. The new method is that children do experiments in groups. In this way, they start learning actively about the scientific method and observe nature. Therefore, they develop a love of science due to natural curiosity. Even if they do not become scientists, they will learn how to think rationally and make evidence-based decisions.

You are still an active researcher and your current work is related to air quality and global change issues. Could you tell us a little bit about your work now?

Sure. For many years, after being in California I was a professor at MIT. I had a large research group to work in the laboratory to learn about the functions and chemical properties of particles in the atmosphere. Many of these particles are there because of human activities.

The goal was to make sure that the work has an impact in society and that it affects public policy. We had success working with air quality in Mexico because it was a very polluted city. And so with many colleagues starting then, we were able to work with the government so that the city became much cleaner.

You have been and are very active in communicating your research and data to not only scientists but also to decision-makers and the news media, has it been or is it difficult to get the message across?

It is difficult to talk about the solution to the problem and how to deal with it. So first you have to decide what to do and then you will be able to communicate that. Sometimes we are successful and sometimes not. For example, I’ve been working on climate change for many years. In our circle, many people cooperate with us but some people in the government, mainly politicians, dismiss the science. So that means we haven’t done a very good job communicating science to that group of people in government.

Some people argue that there are no global change issues. What do you think about that?

I think this thinking should be changed. The best way is to educate children to learn how the scientific method works. It is important to make better strategies to solve these problems. So one of the projects I’m engaged with is to try to communicate with some of these skeptics or deniers. But instead of doing that in a confrontational way – that is in the media or attacking each other – I’m trying to sit down with some of these people in a friendly setting and explain the basic science.

Society has to change in very dramatic ways so it’s not easy. We have a very big job ahead of us to change the way the entire planet functions.

It’s said that the interest for chemistry among the general public is decreasing compared to other scientific areas. At the same time, there seems to be an increase in the interest for environmental issues. Why do you think that is?

Perhaps the reason is that environmental issues have been more visible and they have made more news. Most people just take chemistry for granted. For many years chemistry had a bad name, because of accidents or because ‘chemicals are bad for your body’ and so on – but of course without chemicals, we wouldn’t be here. But the image of chemistry turned out to be negative, partly because of the environmental effects of some chemicals.