Dr. May Berenbaum is an entomologist who focuses on the coevolution of herbivorous insects and plants. Trained at Cornell and Yale, and currently both the Department Head and a Professor of the Department of Entomology at the University of Illinois, she is dedicated to teaching and cultivating science literacy. Her work has developed our understanding of insect-plant relationships and their crucial roles within ecosystems, in addition to generating insightful agricultural practices. Having 6 books, 35 book chapters, and over 300 peer-reviewed papers to her name, Berenbaum is considered one of the most respected entomologists in the world and a pioneer in her field. 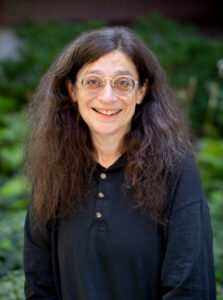 What should we be teaching our children about insects to nurture natural fascination and respect as opposed to the disgust and fear many of us grow old with?

I would love for others to share this fascination with the natural world, including the small and arguably not the prettiest part of the world. Actually, if you look at them under the microscope, they can be just as spectacular as some of the more charismatic animals.

I guess probably the first most important lesson is that this planet, as we know it, would not function without insects. A million-plus insect species that are found in virtually every terrestrial environment on the planet are responsible for the delivery of ecosystem services that may not be very glamorous but are utterly essential. It’s very hard to find a place on terrestrial Earth where you can’t find an insect.

Pollination services have received a lot of attention lately, but also there’s garbage disposal as an ecosystem service. Many insects are among the principal decomposers of the planet. And people don’t really appreciate the value of returning nutrients to the soil and making them available to other organisms. We would be sort of drowning in all kinds of unpleasant materials that would accumulate without those ecosystem service providers. They recycle materials and they aerate soils, in addition to providing more aesthetically pleasing pollination services to most of the world’s flowering plants.

There are about 200,000 insect species that are thought to be pollinators. And by contrast, maybe a couple of thousand vertebrates (including honey possums, a handful of birds, including lorikeets, and maybe less than a dozen lizards). In fact, there are throughout the world 20,000 species of just bees that are supremely effective pollinators. There are foods we wouldn’t have without insects to provide pollination—cacao, the plant that gives us cocoa and chocolate, is just one example. The cacao plant is pollinated by very, very small midges (flies in the family Ceratopogonidae) and without them, we wouldn’t have chocolate.

Just how adaptable are they – how vulnerable or stable is the insect world against climate change?

Although as a group insects can be considered adaptable, we are altering the climate at a faster rate than some insects are capable of keeping up with. It’s clear climate change is affecting all kinds of different communities— and insects live in all kinds of different communities. So they can be disadvantaged when a specific species of plant, for example, undergoes a change in its distribution and abundance. There are some insect herbivores that are so specialized they are limited to a very small number of plant species for survival. If they lose their food plants to climate change, then they’re gone, too–they can’t survive, either.

Bumblebees are basically adapted to cold climates—they do well in places where the temperatures are not too high. And, what’s happened with bumblebees in various locations in the Northern hemisphere is that, as temperatures have increased, they tend to drop out of the southern part of their range because it gets too warm for them— their range extends northward.

This “migration” or redistribution has the potential to affect any other organism that interacts with the bumblebees. I’d say probably the majority of species of plants are not incredibly fussy as to which insects visit and pollinate them, but there are others that are very specialized.

So for millions of years, species have co-evolved—that is, evolved in concert with one another. And when one particular plant that depends on an insect pollinator partner is ready for pollination—so it’s producing nectar, it has pollen available on the male parts of the flower—there’s a narrow window of time for that insect, with the morphological features that allow it to pick the pollen up and carry it, to deliver it to the female parts of a flower of the same species. And if that pollinator is not around when the plant is ready, then the plant does not reproduce. And that’s kind of the end of things for the that individual plant, which can produce no progeny.

That’s very scary! Do you think there is enough change happening to avoid these planetary crises – or are we still headed for major trouble?

Well, I think it’s not an ‘either/or’, because there is major change.

I’ve never seen anything like this moment in time. I think people are more appreciative. Not of all insects; I don’t think dung beetles have a lot of fans, despite the fact that they do perform very vital ecosystem services. But, boy, people really understand pollinators more so than they did 20 or even 10 years ago. And that’s important because pollination provides a hefty portion of our diet! Not the basics; we’ll have wheat because it’s wind-pollinated. And corn is wind-pollinated. But the plant foods that provide us with, you know, vitamins and antioxidants and interesting flavors and aromas–the fruits and vegetables, the nuts, seeds, oils– those are dependent, for the most part, on insect pollinators. So we wouldn’t starve for calories, but we would maybe die of boredom. And terrible nutritional disorders.

Yes, it’s Pollinator Week coming up in Australia! Do you think people understand the value of pollinating insects like bees more, thanks to events like this?

I would say we have Pollinator Week because people are getting it now. Part of what raised awareness in a shocking manner—and sometimes we need that shock— was an odd condition called Colony Collapse Disorder that may or may not have been global, but in the US began in 2006, when honeybees started disappearing without any obvious cause. Beekeepers would go in to check their hives and discover that all the foragers (the oldest, most experienced bees in the hive) would not be there! They apparently simply abandoned the hive, leaving behind the queen and all the grubs and all the food stores. And that’s very un-bee-like behavior. This was kind of a mystery and it just grabbed people’s attention.

As for why these disappearances mattered, here’s an example. The US produces more than 80% of the world’s almonds, mostly in the Central Valley of California. It’s a hugely important multi-billion dollar crop. And every almond commercially produced depends on a flower having been visited by a honeybee. In the US, we use honeybees as managed pollinators.  Beekeepers raise them and then transport them to where they’re needed for pollination. They can pick up the wooden boxes that house the bees, put them in the back of the flatbed [truck], and drive 2000 miles from wherever the bees are to pollinate those almonds.

And at that point in time, in 2007, when these bees started disappearing, there was concern in the American beekeeping community about whether there would be enough bees available to pollinate the vast acres of almonds, or for that matter, the 80 or more other crops here that require help from honey bees. What appeared to be happening, and which is still happening not just to honey bees but also other bee species, is stress from what has been called “the Four P’s”: pesticides, parasites, pathogens and poor nutrition.

As for poor nutrition, with global climate change, there are food shortages of nectar-producing and pollen-producing plants in the US late in the season. So the bees just can’t get enough forage to maintain their numerous offspring.

And then we have the problem of pesticides. We’re relying heavily on systemic pesticides. These pesticides were originally designed to be more targeted and an improvement environmentally because they’re applied as a coating to crop seeds. In theory, when you put the seeds in the ground and the plant starts to grow these water-soluble materials move from the seed into the seedling, into the plant. The tissues of the plant are then protected against insects, which is great if you have leaf-chewing or sap-sucking insect pests.

But people didn’t realize that these water-soluble materials get into the nectar and the pollen where they could be picked up by pollinators. Moreover, 80 to 85% of bee species don’t live in little boxes or in tree cavities; they live in the soil. And the water-soluble materials wash off the seeds, move through the soil and threaten the soil-nesting bees, or end up getting taken up by the roots of wildflowers, outside the managed crop area, where wild bees can come into contact with pesticides through that route.

How was the most recent Insect Fear Film Festival? And any clues as to next year’s theme?

Well, our big problem here in the United States is we have no idea what COVID-19 is going to be doing next February.

Last year we had our first all virtual festival, which was a challenge because we usually show feature-length films, which present a challenge to people’s attention span online. So instead we had a whole program of shorts in our festival. It was our first all-Flea Insect Fear Film Festival, including a half-hour live presentation from Tim Cockrell, an English naturalist/entomologist who runs Flea Circuses! We had silent cartoons from 1919, we had documentaries, we had about a decade’s worth of Raid® insecticide commercials with animated fleas and cockroaches.

And finally, with Thanksgiving just around the corner – what are you thankful for this year?

Pollinators! They bring color, flavor, and other forms of joy to our lives year-round. At Thanksgiving, the joy comes in the form of pumpkin pie and cranberry sauce! Thanksgiving is all about eating, which means it’s all about insects.