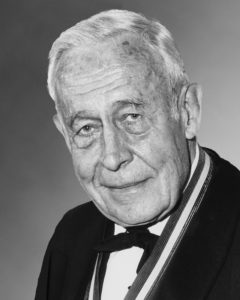 Roger R. Revelle was a scholar of great breadth in oceanography, world population studies, and global climactic perturbations, he was a pioneer in the understanding of global resources.

Roger R. Revelle is director emeritus of the Scripps Institution of Oceanography, emeritus professor of population policy at Harvard, professor of science and public policy at the University of California, San Diego, and a member of the National Academy of Sciences.

A pioneer researcher in oceanography and the study of atmospheric conditions, Dr. Revelle is internationally renowned for his studies of land, water and energy resources as related to population growth and potential economic development in developing countries.

In the early 1950s, Revelle became one of the first scientists to recognize the possibility of the “greenhouse effect” – the hazardous increase in the temperature of the atmosphere as a result of the atmospheric accumulation of carbon dioxide from the burning of fossil fuels. He helped establish research programs to monitor the effect, and he contributed to recent National Academy of Sciences’ reports on the problem.

He subsequently helped organize and served as president of the first World Oceanographic Congress, held at the United Nations. Also, he helped establish the Intergovernmental Oceanographic Commission of UNESCO and the Scientific Committee on Oceanic Research of the I11ternational Council of Scientific Unions. He was the first chairman of the U.S. National Committee for the International Biological Program, which organized comprehensive studies of major ecosystems and of the interactions between human populations and their environments.

Revelle served as Scripps’ director from 1950 to 1964. During those years, he led a series of expeditions that resulted in discovery of the Mid-Pacific Mountain Range and the first measurements of heat flow from the interior of the Earth out through the ocean floor. This work produced early evidence for the concept of plate tectonics.

During World War II, he helped establish the Office of Naval Research. During President Kennedy’s administration, Revelle occupied the newly created post of science adviser to the Secretary of the Interior. In 1964 Revelle became Director of the Center for Population Studies at Harvard. It was then that he began work on problems relating to world population growth and the social and economic problems of developing nations.

Born in Seattle, Washington, in 1909, Revelle was raised chiefly in Pasadena, California. He earned his B.A. in geology from Pomona College in 1929 and a Ph.D. in oceanography from the University of California in 1936. 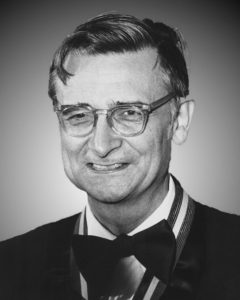 Edward O. Wilson is the co-developer of the theory of island biogeography, he was instrumental in its application to conservation. His research into population dynamics and chemical ecology has led to new insights in modern biology.

Edward O. Wilson, the Frank Baird, Jr. Professor of Science at Harvard and a member of the National Academy of Sciences, is one of the foremost ecologists in the world. He is an entomologist who is perhaps best known as one of the originators and the principal proponent of the discipline of sociobiology. Sociobiology has become a major branch of the biological sciences, at the core of what is exciting and significant in biology.

As a Tyler Laureate, he is being recognized in part for his work in the late sixties on the theory of island biogeography. This theory postulates that the living world is broken into patches, ecosystems on islands surrounded by water or on “habitat islands” surrounded by habitats of markedly different natures.

Working with the late Robert H. MacArthur of Princeton and Daniel Simberloff of Florida State University, Wilson produced evidence that in a given habitat the number of plants and animals is in equilibrium and can be predicted from two key qualities of that habitat: size and isolation. In general, the smaller and more isolated a habitat, the less various and numerous will be the species and individuals living there.

Dr. Wilson’s work has direct relevance for ecology in the planning of wildlife refuges and conservation parks. Such research is helping produce a stronger discipline of conservation biology, through the optimum design in size and distribution of natural reserves to maintain a maximum species diversity. Wilson and others advocate that preserves be kept at or above a particular minimum size, as well as interconnected.

Interested in the social behavior of certain insects, Dr. Wilson did a considerable amount of the early work on pheromones, the chemical secretions used by animals. With William H. Bossert, he provided the first general theory of the evolution and physical properties of pheromones.

Sociobiology as a discipline has greatly improved the understanding of the various forms of social organization which adapts species to their environment. Dr. Wilson has argued that patterns of social behavior are part of the organism’s genetic makeup and evolved in a way to improve chances for preservation of the species. His books include Sociobiology: the New Synthesis (1975), On Human Nature (1978), and Genes, Mind, and Culture (1981), written with C.J. Lunsden. In Biophilia, which will be published this fall by Harvard University Press, he deals with the deep affiliation that people form with other organisms, an understanding of which may lead to a stronger worldwide conservation ethic.

Among his numerous awards are the National Medal of Science (1976), the Leidy Medal of the Academy of Natural Sciences (1979), and the Pulitzer Prize (1979) .