Thomas Eisner and Jerrold Meinwald are the founding fathers of chemical ecology, the science that deals with the varied and ingenious ways in which animals, plants, and microorganisms communicate chemically with one another. All organisms emit and receive chemical signals. To understand the biological function and chemistry of these signals is central to our understanding of nature. Chemical ecology is the joint venture by which biologists and chemists “eavesdrop” on the chemical interactions of organisms. It is a field of enormous potential for changing the future of agriculture and medicine, and promoting understanding of the environment. 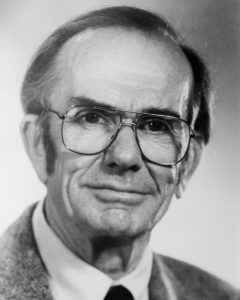 Studying insects, Eisner and Meinwald have been deciphering the chemical signals that these animals use for recognition of mates, location of food, protection of offspring, and defense against enemies. Together, they have unraveled many intricate strategies that insects use for survival, elucidating in each case how specific chemicals play the crucial mediating roles.

Eisner and Meinwald are, respectively, the Jacob Gould Schunnan Professor of Biology and the Goldwin Smith Professor of Chemistry at Cornell University. Their collaborative efforts have spanned more than three decades. The partnership has been ideal, with Eisner doing the biological explorations, and Meinwald the molecular characterizations.

As shown in their earliest studies, even the simplest molecules may playa role in elegant protection strategies. For instance, the whip scorpion fends off its enemies with an aimed spray of concentrated acid, specially formulated to penetrate the skin of the offender. Some millipedes “gas” their enemies with hydrogen cyanide, a deadly toxin which the millipedes store in harmless chemically-masked form and are able to release on demand when attacked. Aquatic beetles cause fish to spit them out by discharging a potent terpenoid repellent when caught. Work done with a marine mollusk led to the isolation of new halogenated compounds, which deter even sharks. 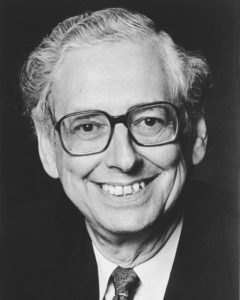 Among the most effective chemical repellents studied by Eisner and Meinwald are quinones, which they found to be widely produced by arthropods. Collaborative work with engineer Daniel Aneshansley showed the bombardier beetle to eject quinones explosively at the astonishingly high temperature of 100°C. Studies of how such repellents mediate biological antagonisms are providing leads to new approaches to agricultural pest control.

In their search for novel substances, Eisner and Meinwald came upon chemicals of unforseen potential. The discovery that birds and spiders reject fireflies led to the isolation of lucibufagins, a new family of steroids. These compounds proved to have cardiotonic effects as well as strong antiviral potency, raising hopes that they might have therapeutic value for humans, and prompting the search for additional medicinal agents from unconventional natural sources.

Charles Darwin’s conceptions of natural selection have achieved renewed impetus, beginning in the 1970’s, with the fusion of molecular and evolutionary biology more than a century after the publication of the Origin of the Species. Edward O. Wilson, 1984 Tyler Prize Laureate, has pointed out that the examination of organisms as physiochemical entities makes the universal operation of natural selection all the more plausible.

Eisner and Meinwald have demonstrated how chemicals, acting as repellents and enticing agents, factor into the evolutionary interactions of insects and plants. They have shown how specific chemicals protect plants, and how insects have evolved countermeasures to circumvent such defenses. Notably, they have shown how sexual selection, Darwin’s term for the “struggle between individuals of one sex, generally the males, for possession of the other sex,” may be mediated by chemicals.

Certain butterflies and moths are able to acquire toxins from plants and accumulate these in their bodies. The males, upon mating, transfer the poisons to the female for allocation to the eggs. This protects the eggs against enemies. Prior to mating the males announce to the females, by use of a chemical signal derived from the poisons, how much toxin they can bestow upon their mates. If the “promissory note” is insufficient, the females will reject the males in favor of others more richly endowed. This finding provided the first chemical demonstration of sexual selection.

The biological and chemical insights provided by Eisner and Meinwald have heightened awareness of the unsuspected and unappreciated roles played by “secondary metabolites” in nature, the myriad diverse substances (often produced in minimal quantities) used by organisms for survival. Their findings have also bolstered the view that nature is a vast resource of chemicals awaiting discovery. Both stress the need for increased exploration of this resource, to hasten discovery of medicinal, agricultural, and other chemicals of practical use. In particular, their studies have shown that even the lowliest of animals, traditionally neglected in chemical explorations, may be the source of compounds of totally unimagined potential.

By focusing on the chemical value of species, their work has had a tangible impact on conservation. To safeguard the chemical treasury of nature, Eisner has acted forcefully for the preservation of species. “Biotic impoverishment is tantamount to chemical impoverishment,” he warns. “Species extinction is the silent calamity of our time.” He emphasizes the need to preserve even the lowliest species or organisms, since they may provide the medicinal agents of the future or the genes for future biotechnical ventures.

Together with his friend, Edward O. Wilson of Harvard University, Eisner was instrumental in mobilizing support for lignum Vitae, a Florida Key, which was eventually purchased for preservation by the state of Florida. He founded the Ad Hoc Committee to Save the Big Thicket of Texas, which eventually became the largest biological preserve in the United States. He has served on the board of directors of the National Audubon Society and is a recent president of the American Society of Naturalists. A council member of the World Resources Institute, he is a consultant on the World Environment and Resources Program for the MacArthur Foundation.

The National Academy of Sciences honored Eisner and Meinwald with membership the same year, 1969. Both have since been inducted into the American Academy of Arts and Sciences and the American Philosophical Society. Meinwald, the 1989 president of the International Society of Chemical Ecology, won the E. Guenther Award in the Chemistry of Essential Oils in 1984 and the A. C. Cope Scholar Award in 1989, both from the American Chemical Society. Eisner won the Proctor Prize from Sigma Xi, The Scientific Research Society, in 1986, and the Centennial Medal from Harvard University in 1989. Last year both received honorary doctorates from the University of Göteborg in recognition of their joint research.

Meinwald was appointed to the faculty of Cornell University as Instructor of Chemistry in 1952, five years before Eisner joined the Cornell faculty as Assistant Professor of Biology. Each is an active musician, Eisner plays the harpsichord and piano, and Meinwald the flute and recorder. They met through music, and music has sustained their friendship throughout their years of collaboration. Along with Swedish colleagues they played a concert of eighteenth century chamber music at the 1989 Annual Meeting of the International Society of Chemical Ecology.

Eisner and Meinwald’s publications and teachings have kindled world-wide interest in the subject of chemical ecology among both biologists and chemists. They have attracted and trained an international group of students who were essential contributors to their research and are themselves now providing leadership in the field.