The Tyler Prize Executive Committee announces the awarding of the 2011 Tyler Prize for Environmental Achievement on its thirty-eighth anniversary to Dr. May R. Berenbaum for her scientific contributions in the field of coevolution of herbivorous insects and plants, elucidating the physiological and genetic basis for understanding the interactions between herbivorous insects and plants, her application of these concepts to agricultural practices, and for sharing her insights on the role of insects in our ecosystems. 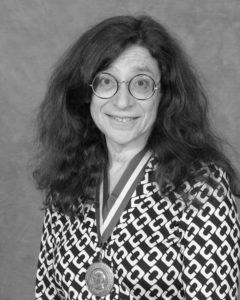 The 2011 Tyler Prize for Environmental Achievement is being awarded to Professor May R. Berenbaum, head of the Department of Entomology at the University of Illinois at Urbana-Champaign, in recognition of her contributions to the fields of entomology and chemical ecology.  Berenbaum has studied the “arms race” that exists between plants and the insects that feed on them, particularly with regard to the chemical and genetic changes that plants make to keep insects from eating them and that insects make to overcome plant defenses.  Berenbaum’s study of this perpetual conflict has uncovered the genetic underpinnings for the theory of coevolution, and in making these discoveries, she has transformed chemical ecology itself.  One of her colleagues, in a letter supporting her nomination for the Tyler Prize, said Berenbaum “is one of the most renowned scientific pioneers in the field.”  In addition to her work on the plants-insects “arms race,” Berenbaum has established a paradigm for understanding the evolution of insect resistance to insecticides and demonstrating practical applications of chemical ecology to modern agriculture.  She also has had a major impact on the environmental sciences through public engagement on issues such as genetically modified pest-protected crops; declines of pollinators such as honey bees; pesticides and resistance; invasive species; and insect conservation.

Professor Berenbaum is considered one of the most respected entomologists in the world and a pioneer in research who has integrated genetics into the field of chemical ecology, the study of nature in chemical terms. Plants and insects are engaged in a biochemical conflict without end, and Berenbaum is considered the first scientist to understand the genetic dimensions of this struggle. Herbivorous insects are overwhelmingly host-specific, likely in response to the ability of plants to produce toxic chemicals to protect themselves. The diversity of toxic molecules produced by plants, and the needs of the insects detoxify those protective poisons, give rise to a constant process of coevolution. She has demonstrated the role of specific molecules and biochemical processes in allowing insects and plants to achieve mutual accommodation, and she has examined the role of a large group of enzymes known as cytochrome P450 monooxygenases in these processes. In doing so, she has helped shape the scientific understanding of the chemistry of nature and of the molecular dynamics that are the determinants of survival. Berenbaum’s research interests in plant-insect interactions extend to practical aspects of agriculture, genetic engineering, the impacts of invasive species and changes that might result from increasing levels of carbon dioxide in the atmosphere. In recent years, she has been actively involved in the study of honey bees and Colony Collapse Disorder, a phenomenon without a recognizable underlying cause that affects bees around the United States. Its main symptom is the absence of adult honey bees in a hive, often with a live queen and immature bees still present. Berenbaum’s scientific work has been matched by her efforts to make insects understandable to people, and her ability and success at communication were noted in all of her letters of reference. In one of those letters, Peter Raven, president of the Missouri Botanical Garden, described her as “one of the finest communicators of science in the world.” She is a frequent guest on radio and television shows, a writer of essays for magazines and newspapers, the writer of the “Buzzwords” column in American Entomologist magazine, and the organizer of the long-running “Insect Fear Film Festival” at the University of Illinois at Urbana-Champaign. She’s also a member of the advisory board of the Science and Entertainment Exchange, a program of the National Academy of Sciences that provides the entertainment industry with access to top scientists to contribute scientific advice.

Professor Berenbaum was born on July 22, 1953 in Trenton, New Jersey and grew up in Levittown, Pennsylvania and Williamsville, New York. She graduated summa cum laude with a B.S. degree and honors in biology from Yale University in 1975. She attended graduate school at Cornell University and received a Ph.D. degree in ecology and evolutionary biology in 1980. After finishing her doctorate, she joined the faculty of the Department of Entomology at the University of Illinois at Urbana-Champaign in 1980, became a full professor there in 1990, and became head of the entomology department in 1992. In 1990, Berenbaum also received a joint appointment with the university’s Department of Plant Biology as well as an appointment as an affiliate of the university’s Department of Ecology, Ethology and Evolution (now known as the Department of Animal Biology) and an appointment as an affiliate of the Center for Economic Entomology at the Illinois Natural History Survey. Berenbaum took her first step down this career path as an undergraduate when she took an entomology class to learn more about insects, especially which ones might be dangerous. She described the decision to take the class to a reporter for the New York Times: “I figured I’d know which ones to be afraid of.” Her fear of insects turned into fascination, and today Berenbaum is considered one of the leading entomologists in the world.

Professor Berenbaum is acknowledged to be a leading source for information on insects and issues relating to them, in part due to her extensive service to the National Research Council (NRC) of the National Academy of Sciences. She has served on the NRC Board on Agriculture (1995-2000) and Board on Environmental Studies and Toxicology (1996-1999), and she has served as chair of the NRC Committee on the Future of Pesticides in Agriculture (1998-2000) and Committee on the Status of Pollinators in North America (2006). Berenbaum was honored as a National Associate of the National Academies in 2001, a designation created that year to recognize extraordinary service to the National Research Council. Berenbaum is a fellow of the American Association for the Advancement of Science (1991), an elected member of the National Academy of Sciences (1994), a fellow of the American Academy of Arts and Sciences (1996), a fellow of the American Philosophical Society (1996), and a fellow of the Entomological Society of America (2002). She has received many honors and awards. The National Science Foundation gave her its Presidential Young Investigator Award (1984-1989); the Ecological Society of America gave her the George Mercer Award for an outstanding paper by a young ecologist (1988) and the Robert H. MacArthur Award for meritorious contributions to the field of ecology (2005); the American Society of Naturalists gave her its E. O. Wilson Naturalist Award (1999) as an active investigator in mid-career who has made significant contributions to the knowledge of her field, and the International Society for Chemical Ecology gave her its Silverstein-Simeone Lecture Award (2000) to recognize her work at the frontiers of chemical ecology. The American Committee for the Weizmann Institute of Science gave Berenbaum the Weizmann Institute Women and Science Award (2004) to acknowledge her as an outstanding woman scientist in the United States who has made significant contributions to the scientific community; the Entomological Society of America has given her its Distinguished Achievement Award in Teaching (2006) and the North American Pollinator Protection Campaign has named her a Pollinator Advocate (2009). Berenbaum has participated in more than 150 invited talks across the United States as well as similar events in Canada, Brazil, England, Sweden, Italy, Hungary, South Africa, Australia and Germany. She also has organized 15 symposia and other meetings in the United States and Canada, including meetings hosted by the National Science Foundation, the National Academy of Sciences, the American Institute of Biological Sciences and the Entomological Society of America. Berenbaum’s accomplishments have been noted by her home campus at the University of Illinois at Urbana-Champaign. In 1996, she was named a Swanlund Professor, the highest endowed title at the university, and in 2000 she received the university’s Chancellor’s Award for Distinguished Public Service. In addition, Berenbaum’s name has appeared on the university’s “List of Excellent Teachers” for at least 29 semesters since she began teaching there in 1980.

Professor Berenbaum has written six books and has contributed to nearly 40 chapters in other books. She is listed as an author on more than 220 papers and letters published in numerous peer-reviewed journals. Those publications include Ecology, Evolution, Insect Biochemistry and Molecular Biology, Insect Molecular Biology, Journal of Chemical Ecology, Nature, Oecologia, Oikos, Proceedings of the National Academy of Sciences, and Science. In addition, she has written more than 100 articles and editorials for a wide range of non-scientific publications that include the New York Times, the Washington Post, PARADE magazine, and the Ranger Rick magazine of the National Wildlife Federation. She has also authored six books on insects and related topics for the general public (including, most recently, a honey cookbook). Berenbaum was described in a 1997 New York Times article as “the most relentlessly creative insect advocate in the world.” She is the creator of the “Insect Fear Film Festival,” which combines entomology and public outreach in a project that has run more than 28 years at the University of Illinois at Urbana-Champaign. The annual event shows films such as “Them,” “Mothra” and “Empire of the Ants” and gives film-goers the chance to see and handle live specimens between films, an activity that Berenbaum describes as an opportunity to “meet the stars.” In 2009, the American Association for the Advancement of Science honored Berenbaum with its AAAS Public Understanding of Science and Technology Award, noting “her extraordinary ability to integrate her original research on the world of insects with her inspirational efforts to communicate the wonders and complexity of nature.”

Professor Berenbaum’s nomination for the Tyler Prize was initiated by Gene E. Robinson, a professor of entomology at the University of Illinois at Urbana-Champaign and director of both the University of Illinois Bee Research Facility and the Institute for Genomic Biology, who said her work “continues to have exceptionally strong impact, uniquely combining high-impact scientific discovery and effective public engagement.” The nomination was supported by several notable names in conservation, among them Thomas Eisner, a Tyler Prize Laureate and Jacob Gould Schurman Professor Emeritus of Chemical Ecology at Cornell University. In a letter of support for the nomination, Eisner said of Professor Berenbaum: “She has helped shape our understanding of the chemistry of nature and of the molecular dynamics that are the determinants of survival . . . . May Berenbaum is one of a kind. An achiever of enormous influence, she is eminently worthy of the highest recognition.”